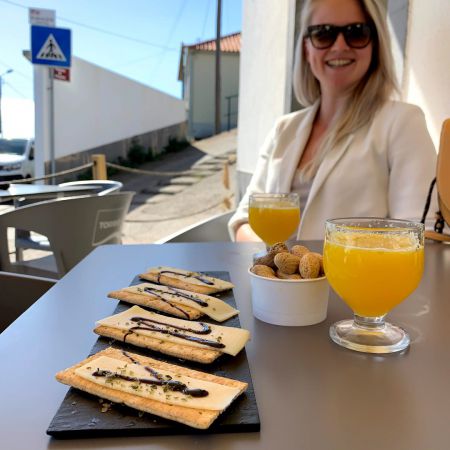 Recipe Poncha da Madeira
For the last 15 years, it has been a tradition for our family to visit the Poncha Bar first when we landed at Airport Funchal. On the way to Calheta, we would drive past Ribeira Brava and take the exit towards Serra da Aqua where our and Madeira's most famous Poncha Bar is: Taberna da Poncha. A place that became synonymous with celebrating the first day of holidays in Madeira by raising a glass of Poncha together.

The origin of this bar is also quite special. The old man who ran a small supermarket here until about 10 years ago saw the number of customers drop every year. This was mainly due to the arrival of the larger supermarkets on the island. Something that happens all over the world, unfortunately. But his entrepreneurial blood ensured that he did not give up, but continued with something else. The counter, scales and cash register remained, but all the boxes for grains and vegetables were replaced by glasses, bottles of aguardente, orange presses, glass jugs and a large set of carhalhinhos. And the Taberna da Poncha was a fact. By now, he no longer presses himself, but the young family has taken over the work. And he especially likes to walk around to pick up some empty glasses here and there. It's great to see him like that. Always a friendly nod and a cuddle with my parents' dog.

We thought it would be fun to share with you the recipe to make such a Poncha at home. Especially for those who have not been to Madeira yet, but also for our guests who like to relive the moment at home. There are several different recipes, but below we will discuss the most commonly served and perhaps the most original form of it.

Poncha is Madeira's most traditional drink! That is, anyone who goes to Madeira and has not drunk Poncha cannot boast of having been on the pearl of the Atlantic. Although it is a typical drink of Câmara de Lobos, it is known and appreciated all over the island. It is a drink that is enjoyed all year round in Madeira's homes and at the many festas that take place here, especially during the summer months. And what is perhaps most special about this fairly labour-intensive drink, it will always be made fresh in front of you. No matter how busy it is, everyone always waits their turn. Perhaps that is also part of the friendly characteristic that the Madeiren people usually have.

In the past, it was only made with a distillate of cane sugar (brandy), to which the same amount of water, sugar and small thin pieces of lemon peel were added.

Over the years, this recipe has been further developed and perfected. Currently, brandy cane sugar is the timeless element, an improvement was the bee honey from Calheta mixed with lemon juice. For those who like different drinks, we suggest you try the different flavours of this drink during your time in Madeira, for example passion fruit, tomato, orange, absinthe or whisky. These flavours are obtained by replacing honey with fruit or spirits. Something for everyone, of course. We like the Poncha with Tangerina (kind of small very soft/sweet tasting local tangerine) very much. 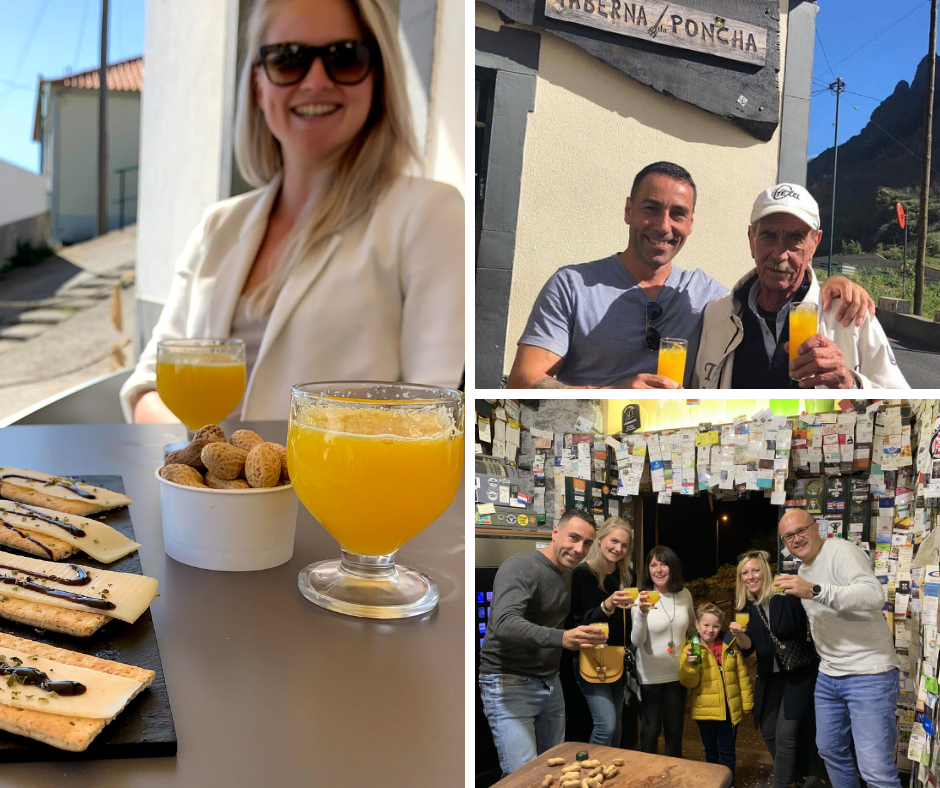 The Poncha and its story
According to some studies, the original recipe comes from India, where it is known as Panch, which literally translated means five ingredients: the arrack - distilled drink obtained from rice or coconut -, lemon juice, sugar, spices, tea - and water.

Until now, it is believed that the first place outside India where this drink was introduced was the island of Madeira. It was introduced in Camara de Lobos, a small fishing village that was visited by the British in the mid-eighteenth century during their travels at sea. Like many other customs and spices from the East, this drink was brought to Madeira.

During the nineteenth century, the Poncha became a drink that was consumed throughout Madeira by the rich and less wealthy people of the island. It became a truly popular drink and one that everyone is still very proud of today.

The basis that makes Poncha special is aguardente de cana. A distillate of sugar cane that is still widely cultivated by the local population on Madeira.
During the colonisation in 1425, sugar cane was introduced to Madeira. From then on, the island became a very important supplier and producer of a product known as "white gold". The land where this grew up was apparently very difficult to cultivate, so slaves were brought in from Africa to work on the sugar cane plantations. Sugar was a luxury product at the time and as the plantations grew larger, this industry became very important to the local economy of the island.

Madeira became the largest and most important sugar cane producer in Europe, and many traders came to the island and established themselves in Funchal and the surrounding villages as far as Ribeira Brava. A very lively product trade developed in the port of Funchal and became a real trading centre for goods. 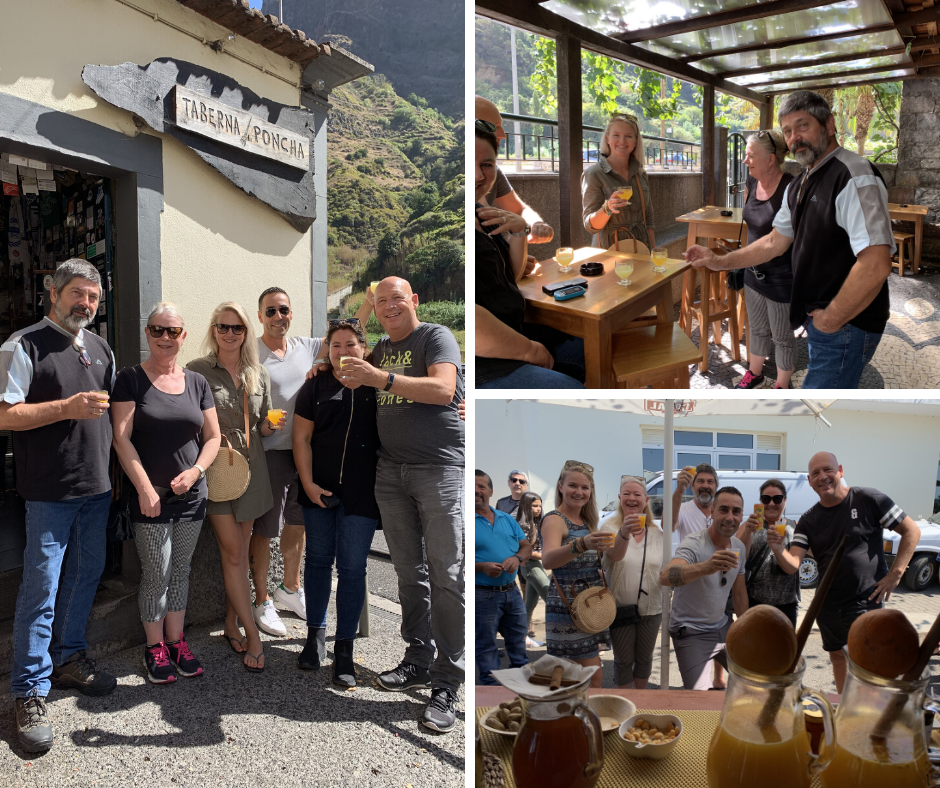 But enough of talking about the history and origins, as nice as that is to know. Let's move on to describing the recipe.

Poncha preparation:
1. Squeeze the lemon and orange and pour the lemon juice into a pot or jug with the honey.

2. With "caralhinho" (the stick for stirring - typical of Madeira), stir everything well and let it swirl between your hands. This unique method ensures that the honey mixes well with the juice and aguardente. The caralhinho is a nickname in Madeira for: little penis. Always good to know and it adds a little more fun to teh story.

3. Add some aguardente and stir again, then add the rest of the aguardente.

4. Make sure the whole mixture is well mixed and everything has completely dissolved into 1 liquid.

5. Add more honey or aguardente, depending on your taste. This will vary from person to person and of course also from the quality of the fruit you use.

6. Before pouring, it might be a good idea to put everything through a fine sieve once more in order to remove any bits of flesh.

7. Serve in small glasses, preferably the original ones, which are the same everywhere on Madeira in every restaurant or café. 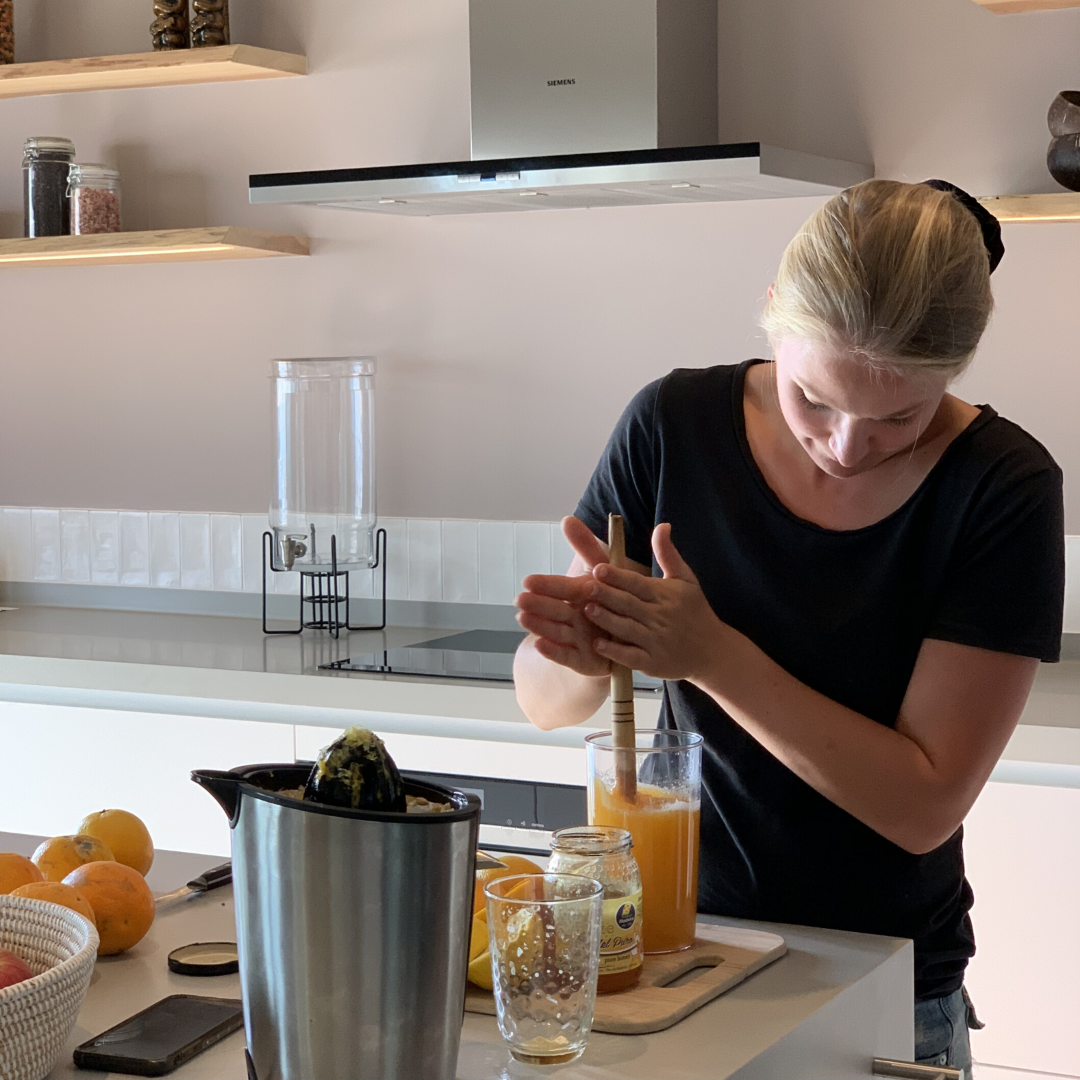 Enjoy this drink of the gods, we can't get enough of it all the time. It has often made us give up cooking at home in favour of a delicious pizza from the restaurant near us. It is a mood enhancer and believe it or not, we have never had a cold or flu in over two years.

However, it has never happened that we drank one poncha. Maybe it's just us, but we would love to hear if others have the same experience :) Let us know in the comments below.