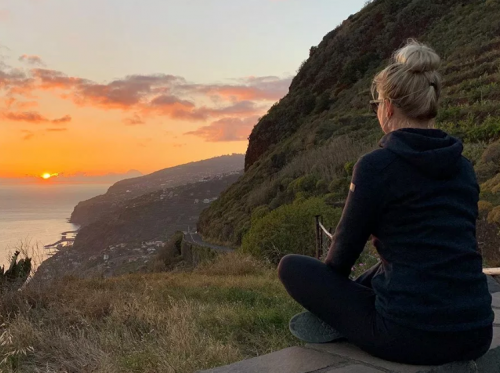 In the meantime, it has become fairly normal for us to have more shorts, flip-flops and t-shirts in your wardrobe than the standard long trousers and sweaters. The view of the ocean and the beautiful nature are also different than on Texel.

It is also fantastic there, but our view from the house is indeed different now. The daily schedule is of course different, no less busy, but we feel less busy if you understand what we mean.

There are some ways in which it’s very similar to our old home on Texel. By this we mainly mean the way in which people treat each other. Perhaps it really is an 'island thing'. During a visit to a restaurant, for example, it turned out that the ATM did not work, so we were unable to pay. The chef from the kitchen came out and said it would be fine to come and pay for it later. It didn’t have to be today, next week is also good if that suits us better. He knows we are going to live here in the neighborhood, so it will be alright.

When our interior company E.S.T.I.D.A. from Amsterdam came to assemble our furniture and upholstery here, the gentlemen were short an M5 bolt to finish the beams of our cupboard. After some time searching and asking the local employees of the contractor, it appeared that nobody had it unfortunately. Until after lunch the electrician suddenly arrived with the appropriate bolt! He had driven home during his break to get the bolt we needed. It’s so great to work together in this way. Making something beautiful together is the primary goal and helping each other out is considered a normal way of working. Hold a ladder, help move something heavy or think together about problems that arise during the creation of our project.

In any case, over the past eight months we have been extremely happy with all the hard-working men here; we see them almost every day and it almost feels like family. They even bring presents for us, from homemade Aguardente to the tastiest Ponchas from 'their' local pub in Câmara de Lobos. But what we were especially happy with was the homemade 'Caralhinho' with our names and our logo engraved in it, wow! Now we can venture to make fresh Poncha at home, very nice.

Also during our daily round of beer and soft drinks with the workers (sometimes 20+) around 4 o'clock we saw two older men plowing in the heat next to us. 25 degrees and no wind, really very hot. We decided to offer them a freezing cold beer and they were very enthusiastic and gladly accepted the gesture. Not much later they called and we got a bag with more than 7 kg of freshly harvested potatoes. Super sweet!

We can keep going like this for a while, but this is precisely the island feeling and the mentality that we are so used to on Texel. It’s been wonderful to experience this and would not want it otherwise!