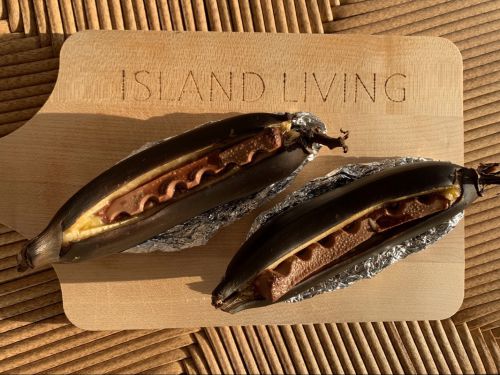 Madeiren bananas find their way to retailers in particular to Portugal and Spain. The Madeiran banana used to be a popular product throughout Europe. Especially because of its sweeter and softer texture, it was labeled as exclusive. However, due to a covenant in the European Union, the bananas had to meet specific standards set by them. Since the bananas from Madeira were too small and did not conform to the curvature that was set, they were refused at the auctions. At the time, this was a blow to the local population who grew bananas in abundance on the often difficult-to-reach terraces in the mountains. This account is known to the population as the Bendy Banana Law that caused many families to look for another crop to make a living. Yet all over Madeira you can still find large areas of land with banana crops. They decorate the mountains and give the landscape a beautiful appearance. For many Madeirens, the banana is still a product that they are very proud of in addition to cane sugar. This is reflected in the many drinks and dishes in which the banana is processed in Madeira.

Origin of teh Madeira banana's

Did you know that the banana did not originate at all in Madeira? This plant came to the island at the time around 1600 as a botanical curiosity. The traders of that time on the ships that sailed all over the world often took products from the countries they visited. As a souvenir, but also to see if it would catch on at home on their island of Madeira, which was only commercially cultivated from the mid-19th century. The most common variety in Madeira is the Dwarf Cavendish Banana. 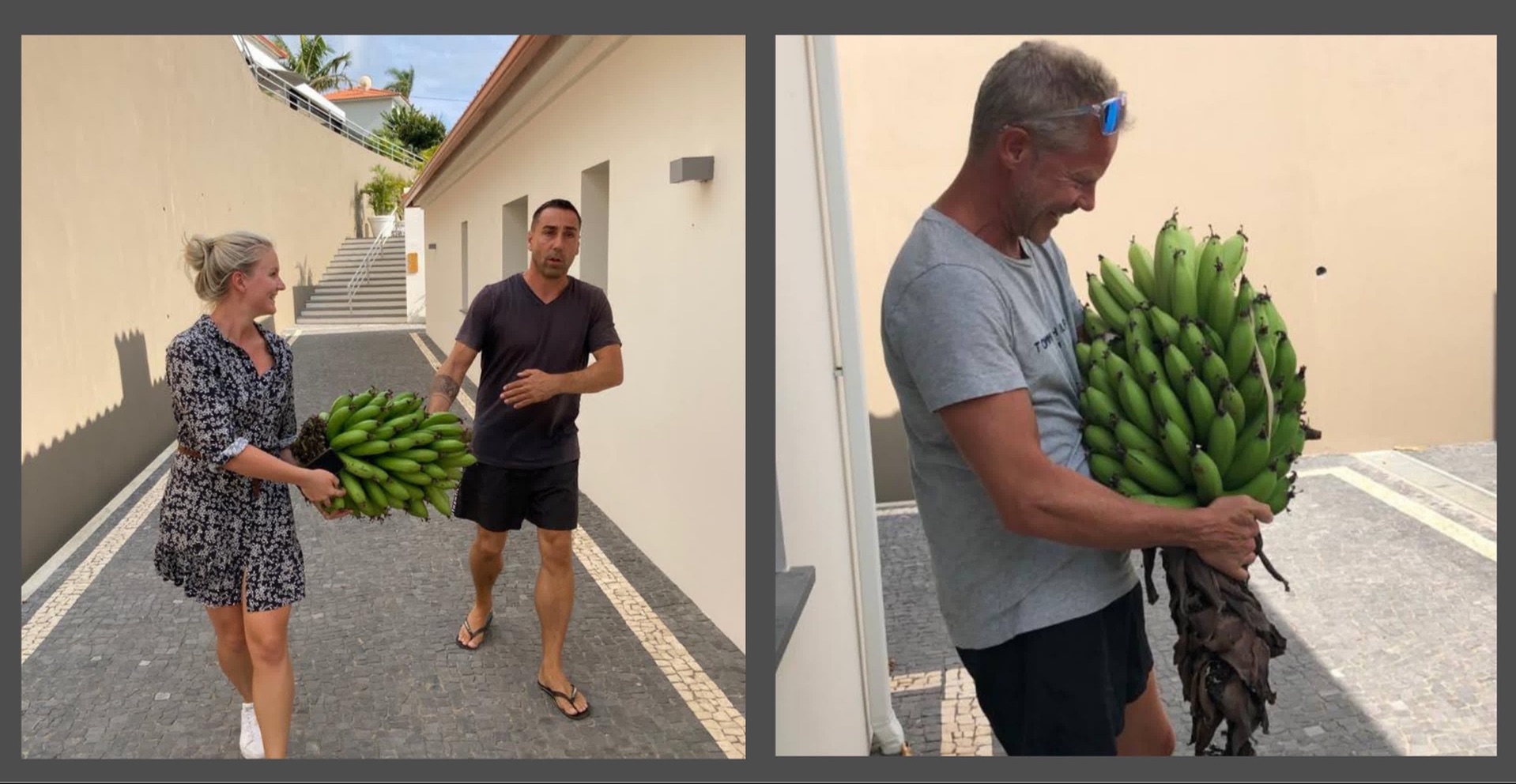 We also have 6 banana plants between our houses. And we are very proud of it. They give a nice green interpretation between the houses and as an extra also beautiful bunches of bananas. We would never have thought this together years ago. Wake up with homemade yoghurt from Kefir plants and pieces of banana from your own garden. It gives a completely different dimension in the morning when you have home-made / grown products on the table.

Processing the harvest together with our guests

Recently, together with our guests who were there, two bunches of bananas were cut loose from the plants. Think that such a truss can easily weigh 50 kg, you don't expect that when you see them hanging like this. For them really something special to experience, in the Netherlands they are usually in trusses of 4 to 6 pieces ready in a crate. 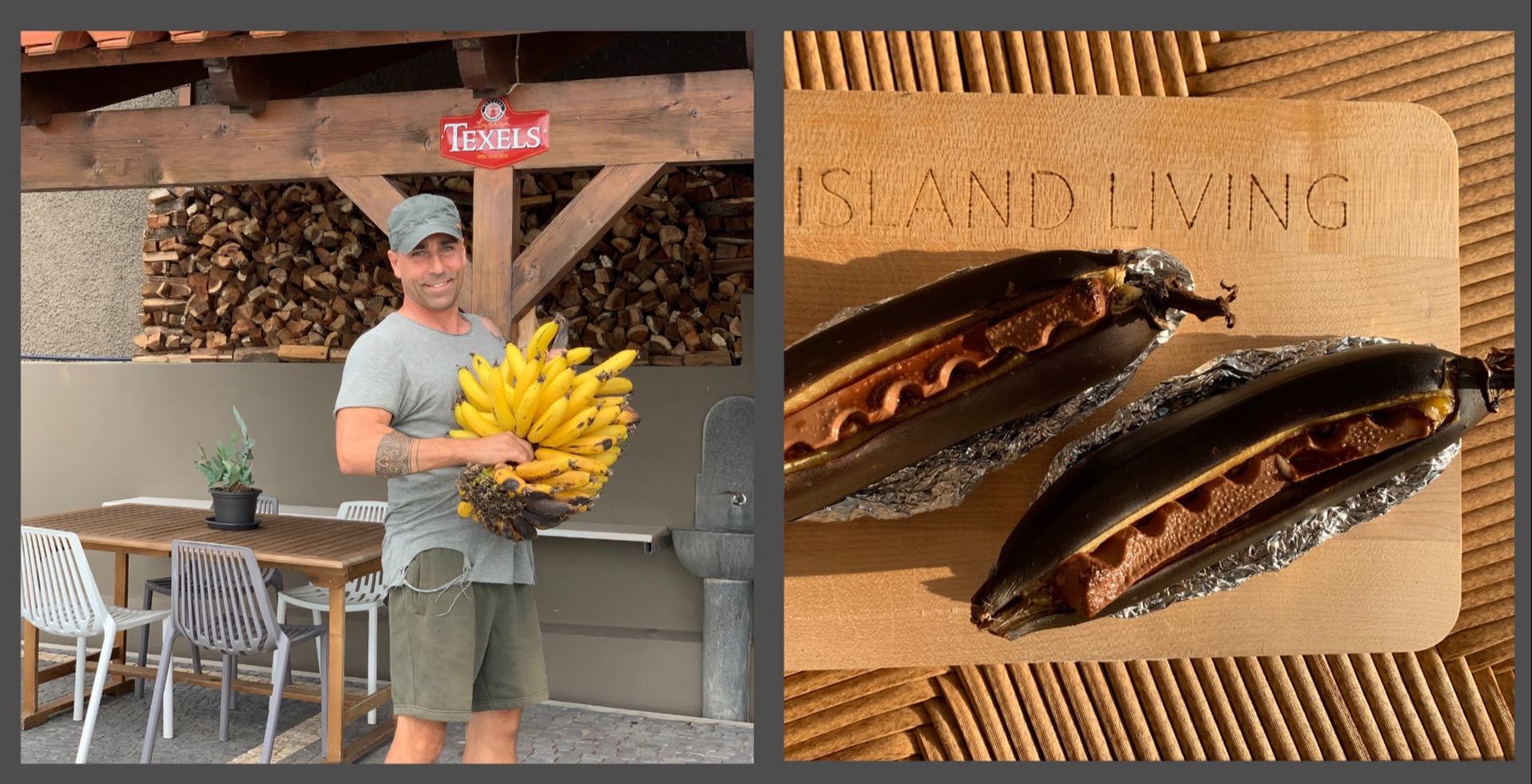 We hung the two bunches that were ready under the veranda near the BBQ area to ripen. This took about 2 to 3 weeks before they all turned yellow. It is a pity that they are all ripe at the same time, and need a treatment before they become overripe and you can no longer do anything with them. Eating everything is impossible unless you eat 400 bananas within 2 weeks together. That is why we cut them into pieces for 90% and package them in seal bags and then freeze them. A fun job to do together, so that you can enjoy it throughout the winter season. There are now about twenty hanging on the truss, which can be picked by the guests to make breakfast or banana bread. There is now 1 truss hanging on the plant, we hope that it will take a while.

The nice thing is that we received a plate from the previous guests with a number of bananas that they had turned into a dessert. Sliced ​​banana, containing a Kinder Bueno and topped with special Madeirarum. Then placed in a hot oven for a few minutes. I must honestly say that we have rarely tasted anything so special. Even our initials were carved on it. Worth a try at home, also great to do on the BBQ. 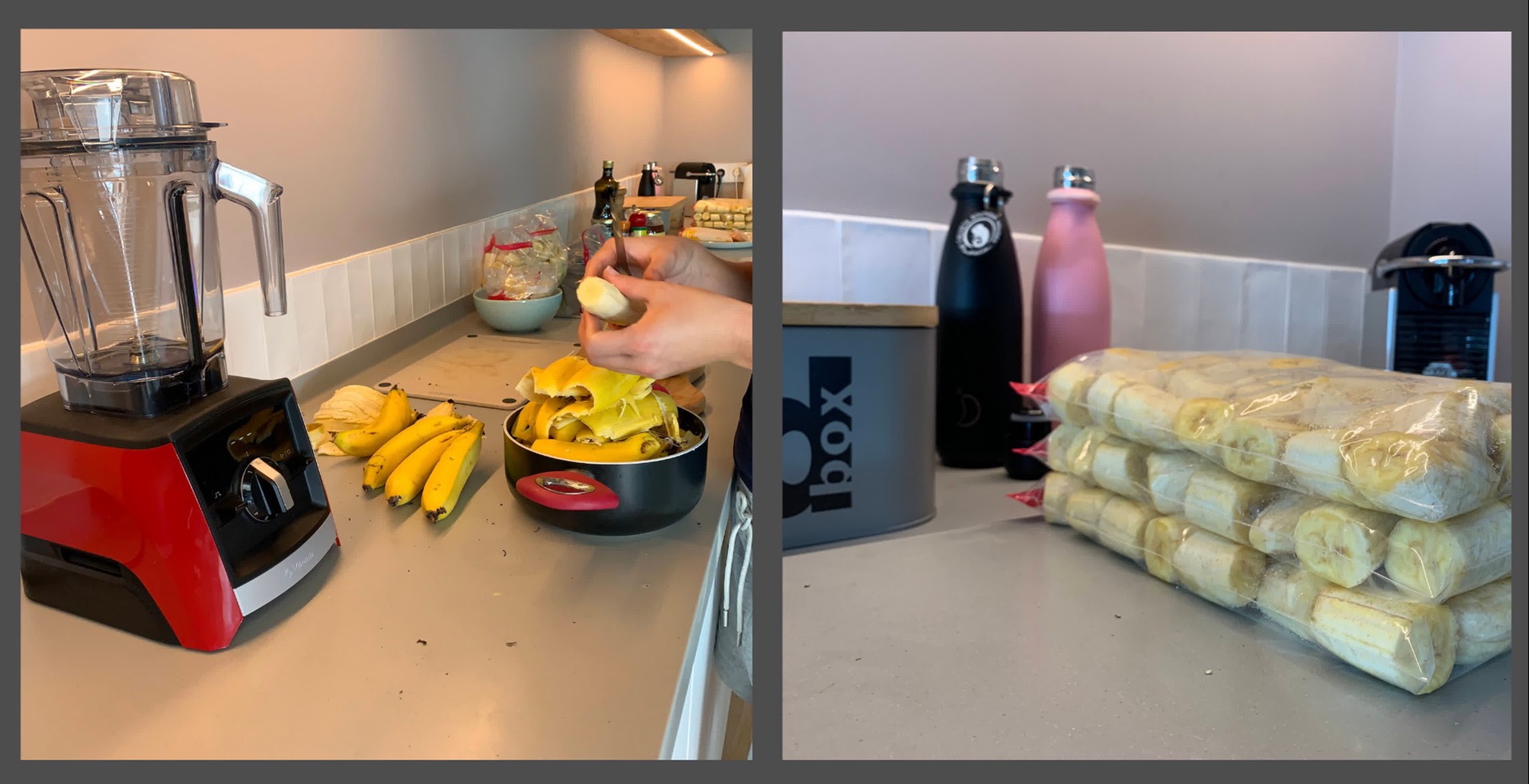 Positive side effects from bananas

That banana is good for health and also has various medicinal functions is unknown to most. Thus, it can improve digestion due to the high amount of dietary fiber. People who often have cramps and stiff muscles benefit greatly from the high potassium content in the fruit. A banana is a natural antacid that helps people who suffer from heartburn. Eating bananas may weaken human depression due to the high tryptophan content. This substance is converted by the body into serotonin. Which ensures that you get a better state of mind. Perhaps the best useful property of a banana peel is that it helps with the itching of an insect bite. Rubbing the inside reduces the itching sensation.​​​​​​​ 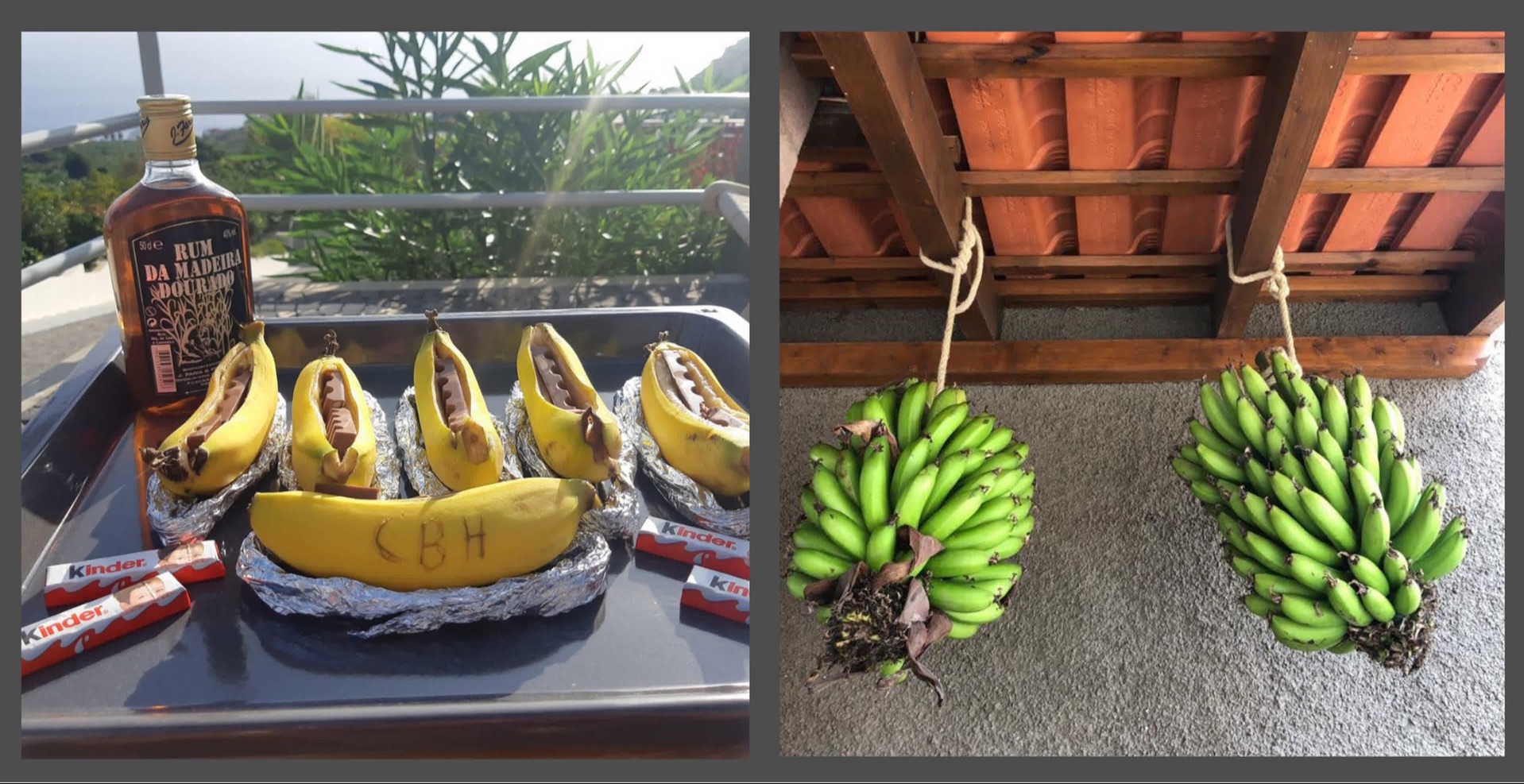 Luckily we love it. It is a beautiful sight on the mountain slopes all around us on this island.

If you want to see more of us, we recommend that you follow our social media channels