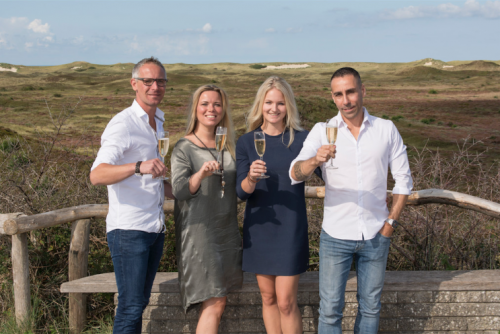 Dave Huizinga - a grandson of founders Joop and Aleida and son of Jan and Rita Huizinga (who expanded De Smulpot) sold the family business to fellow islanders Anton Kalusche and Nancy Hopmans.

The sale of De Smulpot was completed in the spring, but the parties involved chose not to announce the transaction until after the peak season. The staff was informed last Friday. In the short term, nothing seems to have changed much. The hotel restaurant on the Binnenburg, which was founded in 1953, has undergone major renovation and modernization in recent years. "Never change a winning team. De Smul is a super company. Why would you tinker with that?" Says Hopmans. "There is a touch of Anton and Nancy in some of the details.”

The transaction will come as a surprise to the outside world, but not to Huizinga itself. "I took over the company in 1999, after my father and mother had been running since 1968. I always said I wanted to do it for twenty or twenty-five years. In January we were on vacation in Bali and I read a book by Michael Pilarczyk. In it he raises questions such as: "What makes you happy?” and “What do you really want?” At the same time, I discovered that an estate was for sale in Madeira. That seemed like a nice challenge to us. The idea took off and on 7 February I asked my accountant Sandra Koning from NBC to determine the market value of De Smulpot. "

Coincidentally, Kalusche and Hopmans were planning to take over a catering company and had their bookkeeping done at the same accounting firm. We got into contact with each other. Huizinga: "Coincidentally, their name had already been mentioned when we were talking about who would be eligible on Texel to buy the business if we were to sell it. We clicked immediately and we all had done our homework. We signed on 8 April."

To prevent the sale from leaking out prematurely, the transaction was made in secret. Huizinga: "In restaurant Hofman in Alkmaar. With lunch. At least that was the intention, but it was so nice that we sat there from one o'clock in the afternoon until eleven in the evening."

The new owners both have a lot of experience in their field. Kalusche (36), who grew up on Texel, tapped his first beer at the age of 15 at cafe De Slock, his 29-year-old Brabant partner helped her mother in the hospitality industry as a child. They met twelve years ago as colleagues at hotel Holiday Inn in Amsterdam. Hopmans: "When we start in De Smulpot in January, we will be together for ten years."

The couple has been living on Texel for six years. At the time, Kalusche worked as a manager at Paal 9 and at the TESO catering department on the boat, Hopmans is the manager of Boutique Hotel Texel, which she helped set up together with the owner - her friend Marianne Langeveld. "We had been seriously looking for our own business for a while, but it's really unbelievable that things went so quickly," says Kalusche.

The coming months will be used to transfer management. Kalusche starts this week, Hopmans as soon as her work at Hotel Texel permits. Huizinga is available until 1 January. "I still want to participate in the New Year's Dive at beach marker 28. My 30th one, the most of anyone. After that we will leave. I have worked so hard in recent years and am ready for another place, a different life, with more time for each other. "

In Madeira, where his parents have been living for years, he has bought an estate with a view of the Atlantic Ocean. "There is a swimming pool and a garden the size of a football field. We are going to rent out houses and live in the main building. It is only eight years old, so there is not much to be changed. But we are going to take a look at what we have to do still. We are not in a hurry. I also want to organize mountain walks. "

Anne Rienstra, a graduated orthopedagogue, is not only his partner, but has also been his right hand in the company for the past two years. As a hostess she was responsible for orders and personnel planning, among other things. She expects she won't be bored in Madeira. "I have enough plans. For those who like to follow us closely, we have opened a Facebook page." This page can be found at Calheta Boutique Houses. Together, we are going to live our best life.